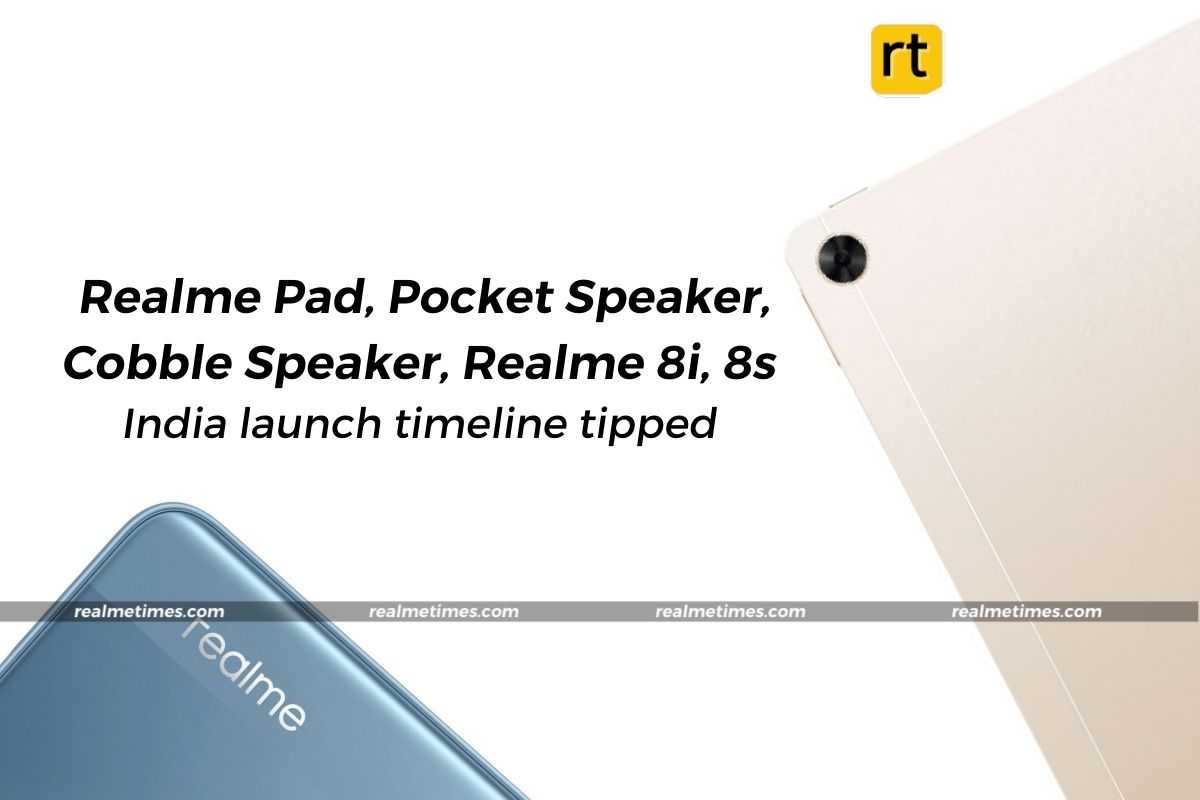 Realme Pad, Realme Pocket Speaker, Realme Cobble Speaker, Realme 8s, and Realme 8i’s launch date in India is yet to be officially announced, but a new tip tells us when we can expect the devices to arrive. A reputed industry insider source has suggested a launch timeline for the above-mentioned gadgets. The Realme Pad, along with the other products, is said to arrive within the second week of September within the next 14 days (possibly next week).

Realme Pad, Realme Pocket Speaker, Realme Cobble Speaker, Realme 8s, and the Realme 8i will soon launch in India. While our industry insider does not know the exact India launch date, he confirms it could arrive in the first or second week of September, which means we won’t have to wait too long to see the devices for real. These devices could make their global debut in India going by the launch timeline, but we cannot confirm this just yet. He also adds that the launch might take place on September 9, 2021, in India (very likely).

According to previous leaks OnLeaks, the Realme 8i is said to feature a 6.43-inch display, MediaTek Helio G96 SoC, and have a square-shaped camera module on the plastic back. It is likely to have a 50-megapixel primary shooter and dual 2-megapixel sensors for depth and macro paired with a 16-megapixel selfie shooter. The battery capacity is said to be sized at 5000 mAh with support for fast charging.

Similarly, as for the Realme 8s, the phone may come with a 64-megapixel triple rear camera setup on the rear, a 6.5-inch 90Hz display,  MediaTek Dimensity 810 SoC, and up to 8GB of RAM. The device will boot Realme UI 2.0 out of the box on top of Android 11.

Realme previously launched the Pocket Speaker in Malaysia. As its name suggests, the Realme Pocket Bluetooth Speaker is designed to fit into the pocket, making it convenient to carry around. According to the company, it’s light and portable design, meaning that it can deliver excellent sound just about anywhere.

The Speaker weighs 113 grams and includes a 3W Dynamic Bass Boost Driver coupled with a passive radiator. It has an IPX5 rating, making it resistant to water sprays and splashes. Connectivity is provided by Bluetooth 5.0, which has a range of 10 meters. Also included is a Game Mode for synching audio and video while playing games, watching movies, or recording audio. Through the Realme Link application, it can be connected to a smartphone. You can read in detail about the product here.

That said, we do not have much information on the Realme Cobble Bluetooth speaker nor the pricing details of any of the above-mentioned products for now. We expect to see some more information in the upcoming days.